How to get Rid of Blue-Green Algae In Aquariums

How to Get Rid of Blue-Green Algae in Aquariums

Are you experiencing mysterious blue-green slime in your aquarium? Or is there a strange smell coming from your fish tank and you can’t find the source? Blue-green algae might be a problem. This article will explain the causes of blue green algae and how you can eliminate it permanently.

What is Blue-Green Algae?

Blue-green algae (BGA) is not actually an algae but rather a cyanobacteria – a very diverse and resilient group of bacteria that uses photosynthesis like plants. It is most well-known for its bright blue-green color in freshwater aquariums. However, it can also be found in black, brown, and even red. You may see it start off as a little spot of green algae that eventually grows into a thick slime stretched over your gravel, decorations, and plants. While cyanobacteria in aquariums does not usually harm fish, it can potentially kill your plants if their leaves are covered and can no longer photosynthesize light.

Blue-green algae can also be identified by its distinctive odor. The smell can be described as foul, earthy, musty and swampy by many people. Once you have learned to recognize the scent, it’s possible to detect cyanobacteria up to two weeks before it’s even visible in the fish tank. 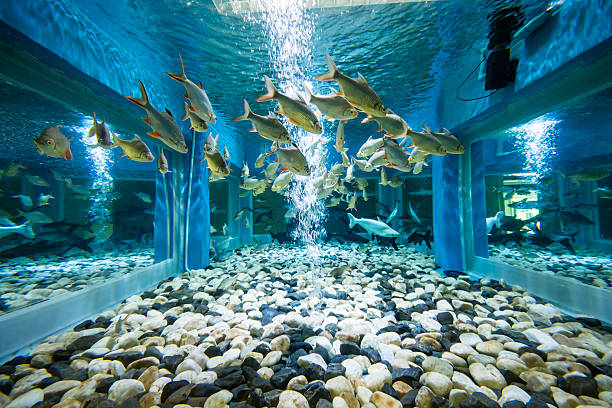 Blue-green algae can be described as a type or photosynthetic bacteria.

Many studies have been done to figure out what causes cyanobacteria blooms, since they can have a deadly impact on the environment. There are not yet any definitive answers, but they often occur in warm, slow moving, and nutrient rich bodies of water. In the aquarium hobby, we have frequently seen blue-green algae pop up wherever organic waste has a chance to stagnate in certain areas of a fish tank. If:

How do I get rid of blue-green algae naturally?

These possible causes are the basis for the first step: manually remove as much slime as you can using a siphon or toothbrush. (Your clean-up crew won’t be of much help, since animals don’t like the taste of blue-green algae.) Remove any excess nutrients by doing water changes more frequently, cleaning the filter regularly, and reducing the amount of fish or food going into the aquarium (if overfeeding is a problem). You can improve the water flow by adding a powerhead or a stronger filter.

Because Cyanobacteria relies on photosynthesis to generate energy, many people recommend that the aquarium lighting be turned off for at least three to seven days in order to starve the colony. However, this method can end up harming your plants (which also use photosynthesis) or causing spats among the fish. The blue-green algae can also return within a few days.

Cyanobacteria can be treated with medicine

Many people have trouble dealing with this stubborn bacteria, but fortunately, it is very weak against a certain antibiotic called erythromycin. This medicine is safe for fish, plants, and invertebrates, and it will not harm the beneficial bacteria in your aquarium. We personally like to use Fritz Slime Out, which is formulated to treat cyanobacteria without raising phosphate levels in the aquarium.

You can begin treatment by scraping off as much blue-green alga as possible. After cleaning the substrate, fill the tank with Slime Out (1 packet per 25gallons). Let the aquarium rest for 48 hours before performing a 25% water change. Add an air stone or other filtration that agitates the water surface to help ensure the fish have enough oxygen during the treatment. The easier it is for the outbreak to be treated, the earlier it can be dealt with. If the blue-green algae is very thick and widespread, you may need to repeat the treatment several times to completely remove the colony.

If you address the underlying causes of cyanobacteria and treat it with Slime Out, you should have no problems getting rid of it in your fish tank. You can also find our complete guide to how to combat other types of algae in freshwater aquariums.